Kohli first met Anushka during a commercial shoot in 2013, but it was only in 2014 when the couple made their relationship public. “Whatever is there is out in the open, I have nothing to hide,” Kohli had stated during an event back then. Anushka followed soon. “We are not hiding anything. We are being two normal young people in a relationship”.

Post India’s loss to Australia in the semis of 2015 ICC World Cup, a group of netizens trolled Anushka, holding her responsible for Kohli’s indifferent form. The Delhi batsman was quick to rubbish all this and defended her. Two years since then, Kohli has been in amazing form across formats. 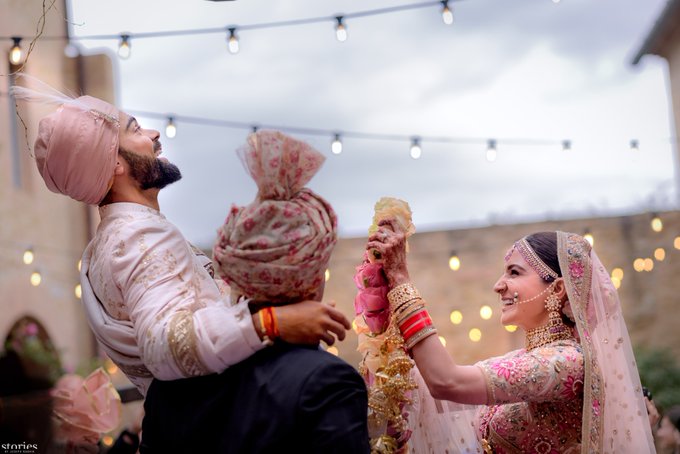 Today we have promised each other to be bound in love for ever. We are truly blessed to share the news with you.This beautiful day will be made more special with the love and support of our family of fans & well wishers. Thank you for being such an important part of our journey.

In fact, statistics prove that Kohli’s career has taken an upward turn ever since he started dating Anushka. Kohli, who made his ODI debut in 2008, had scored only 13 centuries till the end of 2012. Post her meeting of Anushka in 2013, the dashing batsman has slammed 19 centuries, taking his tally to 32.

In Test cricket too, Kohli has been fabulous. Before 2013, he had only three Test hundreds to his name. Post this phase; he has gone on to score 17 more.

The year 2017, in particular, has proven to be lucky for the Indian captain. He has amassed 2818 runs with 11 centuries across formats. As a captain too, he has tasted success. Apart from breaking West Indies great Brian Lara’s record for the most number of Test double hundreds as skipper in the recently concluded three-match series against Sri Lanka, he has led Indian to nine consecutive Test series wins.

With India touring South Africa, Australia, New Zealand and England in near future, Kohli would hope to continue his dream run as her lucky charm, Anushka, is going to be there with him throughout.

Gujarat polls: Youths are frustrated with the lack of employment and poor job compensation, says report