US President Donald Trump said he was pushing ahead with hefty tariffs on $50 billion of Chinese imports on Friday, and the smoldering trade war between the world’s two largest economies showed signs of igniting as Beijing immediately vowed to respond in kind. 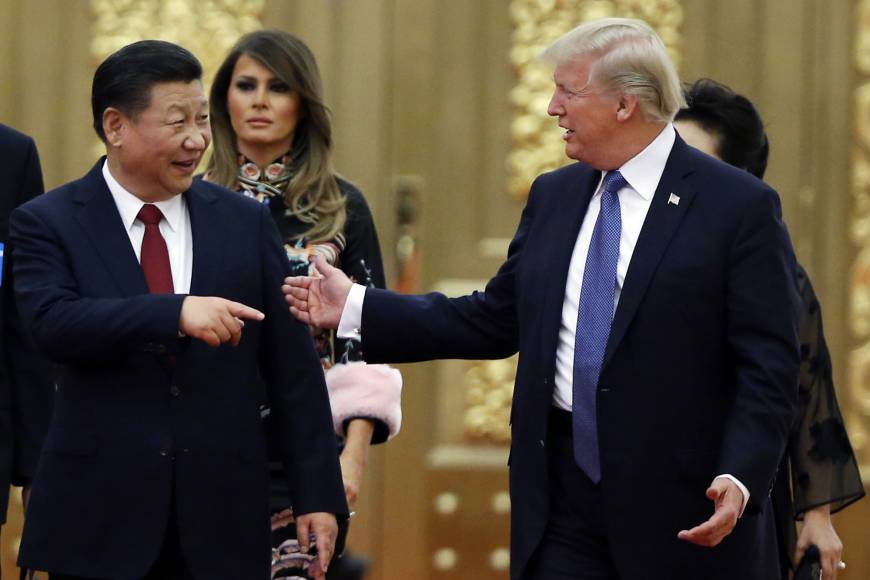 Trump laid out a list of more than 800 strategically important imports from China that would be subject to a 25 percent tariff starting on July 6, including cars, the latest hardline stance on trade by a U.S. president who has already been wrangling with allies.

China’s Commerce Ministry said it would respond with tariffs “of the same scale and strength” and that any previous trade deals with Trump were “invalid.” The official Xinhua news agency said China would impose 25 percent tariffs on 659 U.S. products, ranging from soybeans and autos to seafood.

China’s retaliation list was increased more than six-fold from a version released in April, but the value was kept at $50 billion, as some high-value items such as commercial aircraft were deleted.

Trump said in a statement that the United States would pursue additional tariffs if China retaliates.

“These tariffs are essential to preventing further unfair transfers of American technology and intellectual property to China, which will protect American jobs,” Trump said.

Analysts, however, did not expect the U.S. tariffs to inflict a major wound to China’s economy and said the trade dispute likely would continue to fester.

The list was slimmed down from a version unveiled in April, dropping Chinese flat-panel television sets, medical breathing devices and oxygen generators and air conditioning parts.

The tariffs will still target autos, including those imported by General Motors Co and Volvo, owned by China’s Geely Automobile Holdings, and electric cars.

And USTR added tariffs on another 284 product lines, valued at $16 billion, targeting semiconductors, a broad range of electronics and plastics that it said benefited from China’s industrial subsidy programs, including the “Made in China 2025” plan, aimed at making China more competitive in key technologies such as robotics and semiconductors.

Tariffs on these products will go into effect after a public comment period. A senior Trump administration official told reporters that companies will be able to apply for exclusions for Chinese imports they cannot source elsewhere.

Most semiconductor devices imported from China use chips produced in the United States, with low-level assembly and testing work done in China, prompting the Semiconductor Industry Association to call the new tariff list “counterproductive.”

While many business groups and lawmakers urged the two governments to negotiate instead, there was little sign talks would resume soon.

Trump’s tariffs did gain some support from an unlikely source, U.S. Senate Democratic leader Charles Schumer, who called them “right on target.”

“China is our real trade enemy, and their theft of intellectual property and their refusal to let our companies compete fairly threatens millions of future American jobs,” Schumer said in a statement.

The USTR official said the tariffs were aimed at changing China’s behavior on its technology transfer policies and massive subsidies to develop high-tech industries. The United States now dominates those industries, but Chinese government support could make it difficult for U.S. companies to compete.

Washington has completed a second list of possible tariffs on another $100 billion in Chinese goods, in the expectation that China will respond to the initial U.S. tariff list in kind, sources told Reuters.

U.S. soybean futures plunged 1.5 percent to a one-year low on concerns that an escalating trade fight with China will threaten shipments to the biggest buyer of the oilseed, traders said.

Beijing and Washington had held three rounds of high-level talks since early May but failed to reach a compromise. Trump was unmoved by a Chinese offer to buy an additional $70 billion worth of U.S. farm and energy products and other goods, according to people familiar with the matter.Analysts at Capital Economics said the impact of the tariffs on China’s economy would be small. Even if the U.S. duties reach the full $150 billion, they estimated it would shave well under a half-percentage point off China’s annual growth rate, which could be offset by fiscal and monetary policy actions.

“Neither side will be brought to its knees – which is one reason to think the trade dispute could drag on,” Capital Economics said. “For China’s part, its leaders will be determined not to be seen to back down to foreign pressure.”

Although shares of some tariff-sensitive companies fell on Wall Street, the stock market overall fell only modestly.

“With the announcement of the tariffs, there’s a real risk that we can see a continued increased escalation,” said Robin Anderson, senior economist at Principal Global Investors in Des Moines, Iowa. But he said that underlying strong economic fundamentals in the United States would dampen the market impact.

Trump has also triggered a trade fight with Canada, Mexico and the European Union over steel and aluminum and has threatened to impose duties on European cars.

While China in recent months made incremental market-opening reforms in industries that critics in the foreign business community say were already planned, it has not been inclined to yield on its core industrial policies.