Dissident BJP leader Yashwant Sinha remains unfazed by all the criticism he has faced for his strong critique of the economy and asserts that lack of jobs will be a major issue in the next Lok Sabha elections. He also feels any attempt at polarising voters on issues like the Ram temple or Article 370 of the Constitution will not work on a country-wide basis. 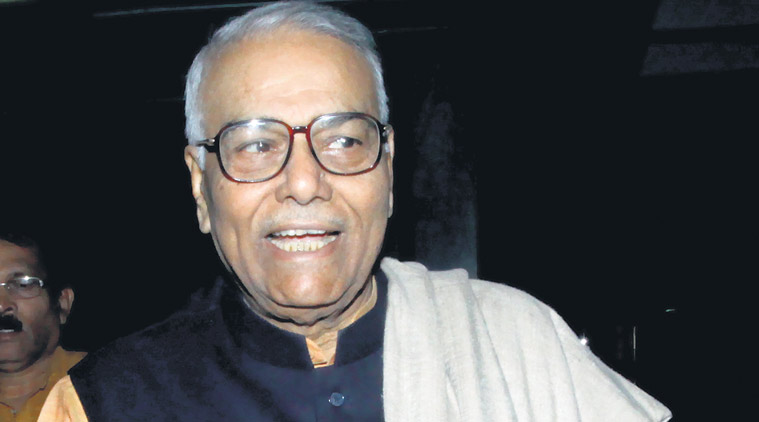 “I feel vindicated (on the Indian Express article attacking the government’s handling of the economy). My first satisfaction is that the issue is being debated. There is quite an informed debate going on. I stand by the facts and figures I quoted. I see no signs so far of a respite for the stressed sectors of our economy. RBI has not revised rates. On the fiscal side again, the indications are that even if they don’t go for fiscal expansion, the target of fiscal deficit will be breached the way expenditure is happening this year,” Sinha told IANS in an interview.

Sinha said he made a point on the economy and it was his assessment- and there can be a differing point of view. “But they (government) have not answered a single issue. Out of the council of ministers, my son (Civil Aviation Minister Jayant Sinha) has come out. People said it should be dismissed as a father-son feud. It was reducing it to the level of such flippancy that the serious issue would be lost. I am happy that it has not happened.”

Asked about whether the BJP would find the going tough in the 2019 Lok Sabha elections and if the ruling party would attempt to polarise votes on issues like the Ram temple, uniform civil code and Article 370, the BJP veteran said it was too early to answer that question as there are about 18 months still left.

“The Indian voter is unpredictable and I should know given the 2004 elections,” he said in a reference to the defeat suffered by his party then after it advanced the polls on the “Shining India” campaign. “New India” is the slogan now, he added.

He said there are two issues in the economy. “One is jobs and (the other) price rise. The Indian voter is worried if my lad has a job or not. That adds to frustration. As far as employment is concerned, it will be a major issue. Household after household will be suffering from unemployment.”

On the question of polarisation, Sinha said, “That kind of polarisation has never worked on a country-wide basis. It may in pockets, but I don’t think it will meet with electoral success. One thing is very certain. Either it (temple construction) will have to be with the consent of the parties concerned or through a court judgement. You will succeed only if there is a conflicting environment. Then only polarisation will take place. And it does not work every time. ”

Admitting that the only good thing about the Modi government is that so far there have been no corruption charges, Sinha said the common man however does not benefit from it. He benefits from cutting-edge administration. “Nothing has changed on that front. For the common man, there is hardly any relief.”

Sinha said there was no clear policy emerging on how to tackle the distress in various sectors. He referred to the way the share market was behaving and called it a case for study. RBI has said it will prevent volatility from market.

“There is a camp which says that rupee should be allowed to depreciate because it is affecting exports. We don’t see any clear policy emerging. From the economic point of view, exports have come down, foreign demand is not there. Industrial demand is not there. Overall demand in the economy is not there. That is one reason why private investment is not taking place. There is no generation of fresh capacity. This is serious… because economic growth will take place only on the basis of rising demand. In 3.5 years of this government, there is no demand.”

On demonetisation, Sinha said he would have opposed it tooth and nail had he been the Finance Minister. “It is a long debate what demonetisation can achieve, what it has achieved and what can be achieved through alternative means.

“We are talking of cashless. We have a whole host of measures to go cashless. I think there are 1.8 million cases (of disproportionate deposits). And all these cases will take their own time. If the Income Tax department has to handle these cases, then tax terrorism has returned. We are declaring to the world we are a country of thieves and black money holders. By when will we see the outcome of these cases, we don’t know. The fact of the matter is that they have blundered badly as far as this move of demonetisation is concerned.”

To a question on the Goods and Services Tax (GST) and the problems encountered by traders on account of its implementation, he said, “Now suddenly it has become the biggest reform since 1947 and they are tom-tomming it. I am seriously questioning the understanding of taxation that these people possess. Fifteen years (after) I introduced CENVAT with three rates, they introduce GST with five official rates- and with many more cesses. There can’t be more than three rates.”

Sinha said that demand needs to be created and there was need to create an investment for demand for goods first in the economy. “We have to create demand for investment goods. That will lead to more job opportunities, money will flow into people’s pockets through employment and then demand for consumption goods will rise. But this is not happening now.”

Doklam back again: Are there other hidden goals that China aims to achieve?

The assembly of American MQ9B combat drones in India

According to R C Bhargava, chairman of Maruti, the auto sector cannot expand with a 50% car tax