Prime Minister Narendra Modi chaired a session of the India’s Business Reforms event at the Pravasi Bharatiya Kendra in New Delhi on Saturday. 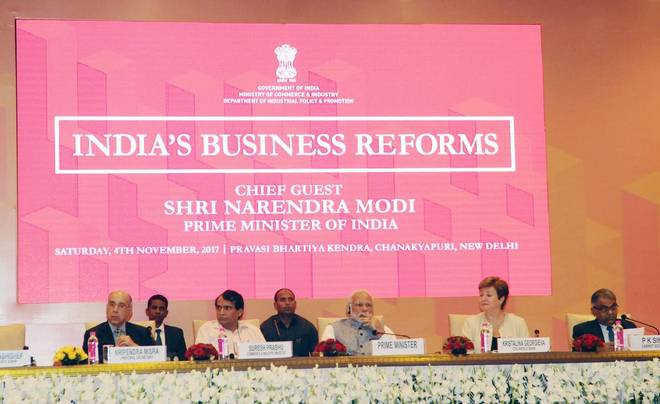 Here are the highlights from the event.

Minister of Commerce and Industry Suresh Prabhu: “All the flagship programmes of the Prime Minister are inter-connected. GDP growth rates will be significantly higher in coming years, thanks to the improved ease of doing business. Ease of trading and ensuring all impediments for entrepreneurs are unshackled, is what we are working on now.”

World Bank CEO Kristalina Georgieva: “We are here to celebrate a very impressive achievement. In 15 years of the history of the ease of doing business, such a jump of 30 ranks is very rare. In cricket, I understand that hitting a century is a big milestone.”

“Today is also the anniversary of Guru Nanak, reminds me of his words that whatever seed is sown, the plant will grow thus.”

“World Bank recognises that high-level ownership and championship of reforms is very important. And what better example for that than Prime Minister Narendra Modi who is here.”

“In last three decades, India’s per capita income has quadrupled. I have no doubt India when it hits its century of independence in 2047, will be a high/middle income country.”

Prime Minister Narendra Modi: “The World Bank has recognised the tremendous work done by us to improve the ease of doing business. In the short time of 3 years, we have moved up 42 ranks. Over last 3 years, I have been constantly telling the domestic and foreign investor community that we, in India, are making serious efforts to make it easier to do business. India has delivered with the highest improvement in rank in a year.”

“This is important as it’s an indicator of good governance, a benchmark for quality and transparency, because ease of doing business also means ease of life. As you know, I have nothing else to do. I have one mission in life — transforming the nation and its people’s lives.”

“After coming up 42 positions from 142, I don’t feel like sleeping. We have created critical mass for a swift take-off. This report doesn’t take into account the GST system that impacts many aspects of doing business. When GST was brought in, they said: Mar gaye! We said we will see for 3 months and analyse the difficulties and resolve them. And the GST Council did that. Where States had differences, committees of Ministers and officials were formed.”

“Almost all issues flagged by traders and businesses are being positively fixed. And If no state objects to the moves in the Council’s meeting on November 9 and 10, then businesses will get genuine relief on their concerns.”

“Many other reforms that have happened, need gestation and stabilisation time before the World Bank considers them. There are many reforms that the World Bank and the government are yet to find common ground. This gives me the confidence that we will do better even in the next year’s report.”

“I wish to list some more global recognition. We have moved 32 places up in the world competitiveness index of WEF. This is the highest rise. We are among top FDI investment destinations listed by UNCTAD.”

“Some people don’t understand the improvement in India’s ranking. They are not bothered. Even today they are questioning the country’s ranking. I want to ask such people: if insolvency code and other reforms were done in your time, would this ranking not have come in your regime?”

“From 2004, when World Bank rankings started, to 2014, whose government was in place? I am a PM who has never seen the World Bank building. While earlier, there were those who knew the World Bank very well. It is not easy to take all stakeholders along. But in last 3 years, there’s been a sea of change both in State governments and the Centre.”

“For two years, I kept hearing about big-bang reforms, big-bang reforms. That has stopped. We reformed FDI in 21 sectors. More than 90 per cent of FDI is on automatic route.”

“The past mindset of excessive control has been replaced with minimum govt, maximum governance. We have abolished 1,200 archaic laws. Similarly, 1000s of important reforms have been carried out by States as well. These don’t get reflected in the World Bank report. This ranking may be called ease of doing business, but I believe it also means ease of living life.”

“Most of the parameters picked in the ranking affects the lives of our ordinary citizens and youth. Now you can register your company in just one day. Railway reservations have improved, passports are now received faster. Ease of doing is important for large businesses, but is critical for small businesses. The issues they face need to be addressed. If required, we will be happy to share our experiences with other countries.”

India in contact with NATO for quite a while’: ‘MEA