In the 18th century, its bejeweled tomb was plundered, and by the 19th century, its formal garden had been lost under a thicket of trees. By the last century, the southernmost reaches of its enclosure were overrun by the teeming city of Agra.

Today’s Taj has been cleaned and repaired, although work continues. Its current difficulties are more cultural than physical.

India’s most iconic structure was built by the Mughal emperor Shah Jahan, a Muslim, a fact that sits uneasily in the psyche of a predominantly Hindu country.

At a time of increasing Hindu nationalism, and the rise to power of the right-wing Hindu political party led by Prime Minister Narendra Modi, the Taj has found itself on the outs.

One state legislator has labeled the Taj Mahal “a blot” built by “traitors.” Others have resurrected an unsubstantiated claim that it was originally a Hindu temple.

In June, a top state official and Hindu firebrand, Yogi Adityanath, questioned the Taj’s legitimacy in Indian culture. Maybe somebody pointed out to him that the Taj Mahal is, if nothing else, a major money spinner in his state.

On Oct. 26, he paid a high-profile visit to the mausoleum, symbolically sweeping it with a broom and describing it as “India’s gem.”

The furor seems to have passed — the Taj is now receiving a more friendly mud-slinging, namely a cleaning with a soil-based poultice named Fuller’s earth.

Ebba Koch, an Austrian scholar who has spent 45 years studying Mughal architecture, is not worried about the current attacks. “The Taj is a power in itself,” she said.

Shah Jahan built the Taj Mahal to hold the body of his beloved wife, Mumtaz Mahal, who died in 1631. Built on a terrace above the meandering Yamuna River, it took 20,000 craftsmen and laborers more than a decade to complete.

It is not the earliest or largest Mughal tomb, but it is recognized as the most beautiful, romantic and serene. As imposing as it is, the mausoleum is given a lightness by its milky marble skin and the placement of its four minarets at the distant corners of its plinth.

The tomb chamber houses the emperor and his bride in highly decorated sarcophagi of marble and pietra dura, fashioned into exquisite floral patterns and calligraphy of Koranic script.

The story is given added poignancy by Shah Jahan’s fate. Deposed by his ruthless son, Aurangzeb, he spent his last years imprisoned in the nearby Agra fort, with a view of the Taj.

Perhaps the greatest injustice to the Taj Mahal has nothing to do with sectarian sensibilities but rather the idea that it is a single structure at the end of a reflecting pond. (Remember the picture of a forlorn Princess Diana on the bench?)

The mausoleum is the undisputed star, but the Taj complex is an enormous walled compound almost 1,000 feet across and originally more than half a mile long.

It contains three other major buildings — the mosque and the assembly hall that flank the mausoleum and an imposing portal, the Great Gate.

And yet the single biggest element of the Taj complex is its least recognized: the garden. The Mughal garden is a highly symbolic space shaped by its prescribed layout, features and allegories. It gives a foretaste of the paradisiacal afterlife.

Perhaps because their full glory seems gone forever, Mughal gardens have captured the imagination of Western garden historians like no other landscape style.

I think this is also because they come the closest to fulfilling the ambitions of all gardeners, to create a version of heaven on Earth. This is why the garden at the Taj Mahal and other Mughal sites will outlive ideological assaults.

The organizing principle is a central axis, normally a narrow canal, bisected by a cross axis with a secondary channel. These waterways, originally built in Persian gardens as a way of irrigating the garden, came to symbolize the four Koranic rivers of paradise.

Typically, the mausoleum or pleasure pavilion is placed at the key intersection of these canals to form the heart of the garden. The Taj, though, is set at the far end of its site, effectively making its landscape setting appear bigger and more lavish.

These four-square gardens, known as chahar bagh, create large quadrants that are further subdivided into smaller geometric planting beds or lawns (there are 16 at the Taj Mahal, for example).

The real allure of the chahar bagh is in its opposing forces, how something so sacred is also so pleasurable, which is perhaps the essence of paradise. Once the comforting order of the architecture is established, the garden becomes a playground for the senses.

The water features, the chutes, the fountains, basins and canals bring delight, especially fast-moving in the Mughal’s lakeside pleasure gardens in hilly Kashmir.
Fruit trees abounded and the flower beds were full of tulips, irises and herbs. The scent of blossoms hung in the air, not just from damask roses but pinks, Persian lilacs and jasmine.

At the Emperor Jahangir’s Kashmir garden, Shalamar Bagh, a water cascade creates a fluid curtain over niches that in their prime would have been filled with cut flowers by day, and lanterns at night, half-veiled by the tumbling water.

An English visitor to Akbar’s tomb on the outskirts of Agra, in the 1600s, described its huge garden as full of fruiting trees — oranges, apples, mangoes, bananas and figs.

The square flower beds were planted with marigolds, poppies and carnations. The bounty exceeded anything he would have seen at home.

Jahangir, the son of Akbar, “never talked about gardens as Islamic,” said Catherine B. Asher, author of “The Architecture of Mughal India.” “He talked about them as places of beauty and repose.”

In her quest to explore and explain the broader context of the Taj Mahal, Koch has moved beyond the Taj complex itself. In her book “The Complete Taj Mahal,” Koch has identified the presence of 44 gardens and related structures fronting the Yumana River in Agra.

They hail from the city’s golden age, before the Mughals moved their court upriver to Delhi, and before the spread of modern Agra, with its environmental degradations. 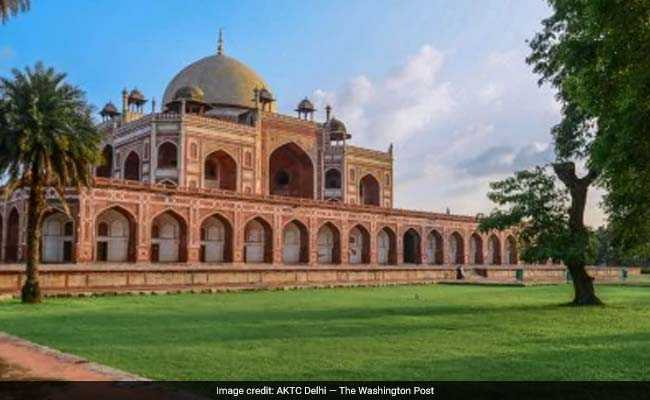 The design of Humayun’s Tomb, built in the 16th century, inspired the design of the Taj Mahal.

Koch sees Mughal Agra as a now-faded riverfront garden city but a utopia in its day. Its glory still can be felt at the Agra Fort and the Taj Mahal, but not so much elsewhere.

Seven of the sites are preserved in some fashion; another seven are partly preserved, but the majority are ruined or lost. The tomb garden of a noble named Itimad-ud-Daula has been well preserved but not restored.
Upriver a little, a garden was established by Mumtaz Mahal but developed by her daughter Jahanara. Only traces of its terraces remains, although its two riverfront towers are intact.

The biggest threat to what is left, said Koch, is the general encroachment of the city.

And yet there is a glowing example of what can be achieved in bringing back these Mughal jewels. At Humayun’s Tomb in Delhi, the vast garden complex of a 16th-century emperor has been returned to something close to its original glory.

The first phase began in 1997 with the restoration of the 26-acre enclosed garden. The work will be completed next year.

In addition to restoring the massive red sandstone and marble pavilion, and its garden, the project included the restoration of 10 smaller mausoleums dating to the 16th century.

The restorations have been led by the Aga Khan Development Network, whose agencies provide cultural, medical, educational and other aid in developing countries. It is headed by the Aga Khan, the wealthy, jet-setting and philanthropic leader of the world’s Ismaili Muslims. 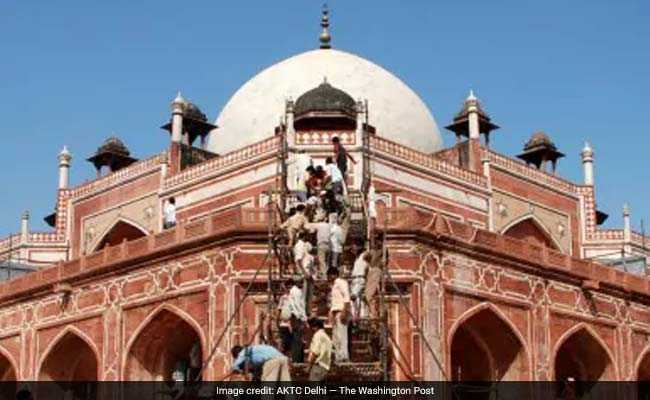 For the restoration of the garden, more than 4,000 truckloads of accumulated silt and soil were hauled away by hand. Stonework for paths and waterways was reset or carved afresh with 60 craftsmen hand-chiseling more than 11,000 linear feet of sandstone edging.

The work marked the first time that a Mughal garden restoration had been so scientifically informed, said Ratish Nanda, chief executive of the Aga Khan Trust for Culture in India.

The conservators discovered that the original garden engineers were highly skilled. The channels were built to drop just one centimeter every 40 meters. “We could only do this with sophisticated surveying equipment,” Nanda said.

“How anybody could achieve this in the 16th century is unthinkable.” Hydraulic systems were rebuilt, and flowing water has been returned for the first time in generations, perhaps centuries. The garden has been extensively planted with period-correct flora, including 3,000 trees of 19 varieties. These include walnuts, apples, quince and pomegranate.

A total of 50 structures were restored in the 80-acre complex. The project also involved the extensive landscaping of a large city park, and improvements to housing, schools and social programs in the surrounding community.

The work has already spurred a tenfold increase in visitors to Humayun’s Tomb, to 2 million annually, Nanda said. He said in another decade the site could draw as many as 8 million visitors a year, which is more than the Taj Mahal.

A new museum will explain Mughal architecture and building crafts and, according to an Aga Khan Trust for Culture news release, “most significantly explain the pluralist Sufi cultural traditions that defined Hindustani culture for at least five centuries.”

The ideal brings poignant reminders of the salutary effect the Taj Mahal had on Western visitors, even in its 19th-century decline. In his 1899 Handbook for Visitors to Agra, H.G. Keene wrote that the Taj and its garden “can make the whole world kin.”