After calling on Azerbaijan President Ilham Aliyev on Wednesday, External Affairs Minister Sushma Swaraj said the two countries were committed to strengthening ties in a range of issues including trade and investment, connectivity and transportation, culture and tourism etc. Swaraj, who is on a three-day visit to the country, landed in capital city Baku on Wednesday.

She also held talks with her Azerbaijan counterpart Mammadyarov, and is expected to represent India at a ministerial meeting of the Non-Aligned Movement over the next two days. This is her first bilateral visit to the country.

“We had fruitful discussions that brought out the high-level of commitment on both sides to strengthening the relationship for mutual benefit of the peoples of both countries,” Swaraj said after meeting the President.

After holding talks with her foreign affairs counterpart, Swaraj said the two countries have taken stock of progress in bilateral relations and spoken of regional and global issues of mutual interest.

“India and Azerbaijan enjoy warm and friendly relations based on historical and cultural ties. Our countries share the values of democracy, respect for plurality and multiculturalism,” she said. 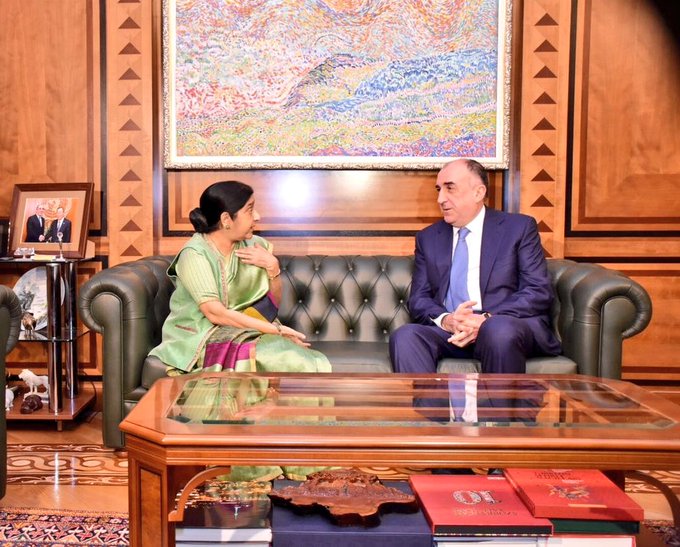 Azerbaijan has invited Indian firms to set up joint ventures in the country for production of pharmaceuticals and medical products.

The counties also noted that since the opening of the Baku-Tbilisi-Ceyhan (BTC) oil pipeline to the Mediterranean port, Indian oil companies have been buying substantive quantities of crude oil.

On international issues, Swaraj said the two countries share the view that terrorism in all its forms is a “global scourge that requires global action in the spirit of ‘zero tolerance’”.

They also emphasised the need for concerted efforts to deal with climate change, and other common challenges.

Going forward, India and Azerbaijan have expressed interest to partner in the field of agriculture, including in cotton and tobacco cultivation.

Earlier on Wednesday, just before her departure from New Delhi to Baku, the Ministry of External Affairs had said in a statement that India, which is a founding member of NAM, remains committed to the purposes and principles of the movement.

“The External Affairs Minister’s participation in the NAM Ministerial Meeting will underline India’s continued active and constructive engagement within the movement with a view to further strengthen solidarity and cooperation among its member states,” the statement further added.

Commonwealth Games 2018: Coach reminded me that my life depended on this after failing two attempts, says silver-medallist P Gururaja